With the rapid development of broadband wireless networks, more and more attention has turned to distributing real-time multimedia services over wireless networks. Recently, Wireless LANs (WLANs) based on IEEE 802.11 have come into widespread use for accessing the Internet and are expected to be used for Digital Video Broadcasting (DVB) services over home and nomadic networks. On the other hand, since IP multicast provides a scalable and efficient means for distributing datagrams to a group of receivers, IP-based networks were proposed for delivering DVB services. The DVB systems based on IP multicast typically employ an application-level protocol to provide some information about the set of receivers and reception quality statistics. The Real-time Transport Protocol (RTP) is usually used for this purpose. RTP or MAC layer of the IEEE 802.11 does not, however, guarantee any Quality of Service (QoS) for real-time multimedia multicast applications, although packets lost usually happen due to collisions, fading or interference in WLANs. Therefore, it is essential to employ some error control techniques at application layer to guarantee very low Packet Loss Ratio (PLR) requirement needed for DVB services over wireless home networks.

On the other hand, as well known, there are mainly two categories of error control techniques at the application layer:

Many studies have shown that Hybrid Error Correction (HEC) method that combing ARQ and FEC can perform better than ARQ or FEC alone. We thus focus on the performances of HEC schemes for DVB services in wireless home networks. Actually, the project includes three parts as follows:

In the following, we will take three simple examples for explaining the principle of FEC, ARQ and HEC techniques. First, Figure 1 shows an example of operation of an FEC system. In this example, the FEC encoder produces two redundant parity packets (P1, P2) for every three data packets sent. If one data packet (D3) and one parity packet (P2) are lost, the receiver can reconstruct the data packet (D3) by FEC decoder. 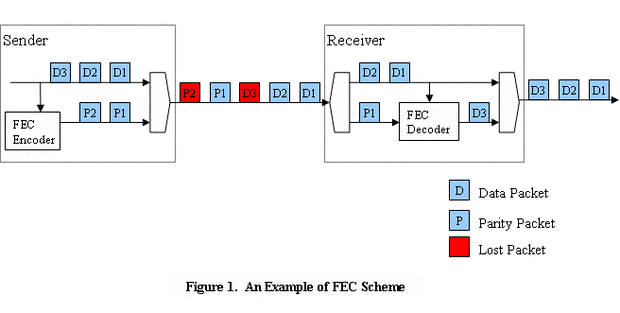 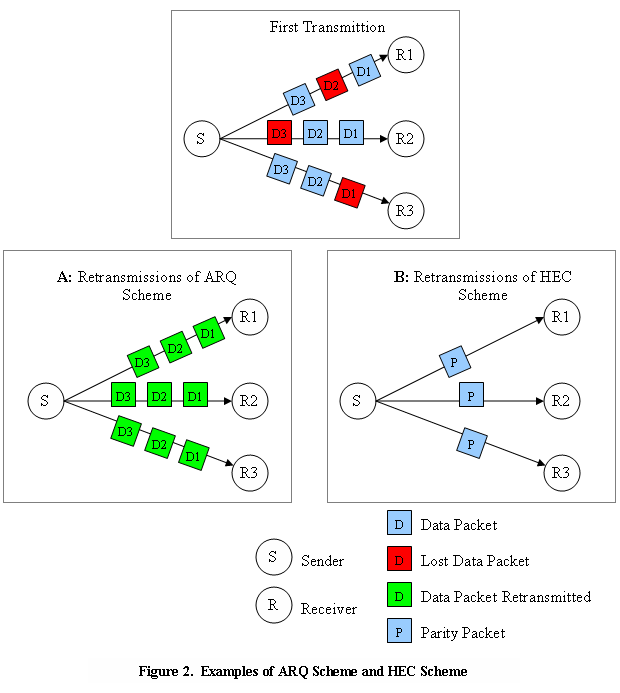