Reliable multicast in wireless applications is gaining importance with the development of telecommunication technology. Applications like multicast file transfer, distributed computing, chat, high quality digital TV and whiteboard applications need reliability. However, due to mobility and wireless channel characteristics, obtaining reliability in data transfer is a difficult and challenging task. The current application layer multicast schemes are always based on MAC layer broadcast (shown in Figure 1), which is unreliable. IEEE 802.11x does not support reliable multicast due to its inability to exchange RTS/CTS and ACKS with multiple recipients.

This project is to enhance and extend MAC protocols to improve the Quality of Service (QoS) of Multicast with high rate real-time traffic in Wireless LANs. The outline and main tasks of this project are as follows:

We explore two main reliable MAC layer multicast schemes in this project. The first one is called SEQ driven Leader Based Protocol (SEQ-LBP), in which a receiver is selected to be the leader. The SEQ frame is used to announce the sequence number of multicast data frame and to lead the receivers to set a timer. On erroneous reception of the data frame and has not got it yet, the leader does not send an ACK, prompting a retransmission. On erroneous reception (timer timeout) of the data frame and has not got it yet, each non-leader receiver sends a negative ACK (NACK), which destroys the potential ACK from the leader and prompts the sender to retransmit the data frame. SEQ-LBP provides reliable multicast service for both leader and non-leader receivers in the MAC layer. SEQ-LBP needs the minimum number of redundancy transmissions among all pure ARQ based schemes. 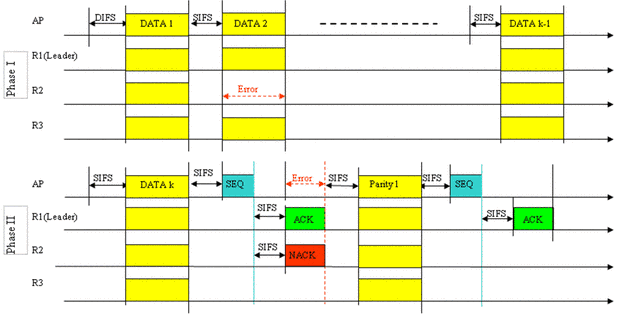 The other reliable MAC layer multicast protocol is called Hybrid LBP (HLBP) which combines SEQ-LBP and packet level FEC in the MAC layer, shown in Figure 3. Using a block coding, parity packets are generated from a block of original data packets. HLBP transmits a block of original data packets using raw MAC broadcast and retransmits parity packets using an improved SEQ-LBP which is based on block feedback. HLBP is much more efficient than SEQ-LBP especially for large multicast groups. HLBP needs the near-minimum number of redundancy transmissions among all packet level schemes.